Clay Waldrip is what some would consider ‘self-made’ in the ag aviation world. Not born into an ag aviation family, Waldrip grew up in the Northwest Texas Panhandle. Like many before him, Clay spent his summers working on farms. It was there that Waldrip got his first taste of the yellow airplanes, watching them spraying the same crops he tended to as a teenager. It was then that Waldrip began shaping his future towards aviation.

He started on the ground at the very airport his business is now based out of, and working for a local operation he now owns, Waldrip learned the ropes of the ag aviation business as a ground crew member. He began taking flight lessons out of Dalhart, Texas, gaining his private and commercial fixed-wing ratings in 2009. He graduated to spraying in July of 2011. Just under ten years later, Waldrip and his wife would purchase the business, rebranding the company to the name Flying W Aviation on January 1st, 2021.

The Dalhart area comprises a wide variety of farming. From potatoes to watermelon and pumpkin farmers, corn, cotton, alfalfa, oats and wheat are all grown in the small Texas panhandle community. Organic corn in the area is a growth industry around the Dalhart area that sees the company spraying over 200,000 acres each year across all crops sprayed. A number that continues to grow annually. Spraying organic crops is more of a challenge for ag aviation. Organic chemicals require OMRI certification, which is an expensive proposition for spraying. However, Waldrip has continued to grow that segment of the business as organic corn, soybean, and wheat crops continue to be more and more prevalent in the Dalhart area, primarily used for feed for a large local organic dairy farm.

“Liquids and herbicides make up 40% of what we spray, with the other 60% made up of fungicide and miticide for spider mites in corn,” said Waldrip.

Flying W Aviation started with only a single aircraft, but has now added an AT-502B in addition to the AT-802A pictured.

Waldrip stated that in addition to the standard safety concerns of ag spraying being primarily wires in the environment, challenges exist by way of a high-density altitude, which differs from many other areas. Dalhart, Texas sits at 4000 feet MSL. In addition to some of the different regions, the company works close to New Mexico, where altitudes can rise to over 5000 feet, adding another level of complexity to the flight.

Drift is also a major factor in the company’s flight environment. Dalhart is a constantly challenging area for wind. “It blows here. It can blow at 40-50 miles an hour here regularly, so that is one of our biggest challenges. Sometimes we have to get up early to beat the wind where we can get dry, hot, and windy very quickly.”

In addition to the windy and hot climate, most of the dirt strips he lands at out in the field are short field strips with wires on the northern end. This means that the short strips are one-way in, one-way out strips. Waldrip remains positive in his safety focus, content not pushing the envelope and mitigating as much risk as possible on each flight.

Safety is a major priority for Flying W Aviation, which for Waldrip involves in-house and external training along with site surveys among other safety measures.

Flying W Aviation mixes all of their own chemicals in-house with ample storage at their Dalhart, Texas headquarters.

Flying W operates in Oklahoma, Texas, and New Mexico thanks to their central location that can see an aircraft make it to New Mexico or Oklahoma within 15 minutes from their base in Texas. While the company currently operates a single 2019 model AT-802A, expansion is now underway; Clay has hired an additional pilot, and took delivery of an AT-502B model in May.

The company mixes its chemicals in an on-site chemical warehouse at their Dalhart base that provides them the turnkey ability to go from office to chemical warehouse within the same facility and another hangar operated by the company nearby used for aircraft storage and overflow when needed.

Most of the training done by Waldrip and his second pilot has thus far been in-house training. However, the company is looking to expand its training and is entertaining a recurrent turbine course held in Manhattan, Kansas, in the near future. Wintertime offers the opportunity for both pilots to maintain their currency, do IFR work, and operate some charter work.

In addition to standard radios, the company’s AT-802A features a Garmin transponder with ADSB in and out. For GPS and flow control, the operation uses Insero’s AgPilotX through a mounted iPad in the cockpit, which also integrates with ChemMan.

Due to the complexity of some areas the company flies, Waldrip has all of the farms he works already mapped out. This allows him and his staff to accept a work order and quickly deploy if needed with a direct to setting and a shape file to execute the work if the complexity of the specific job requires it.

On using the AgPilotX, Waldrip comments that the ability to incorporate so many new pieces of technology into the cockpit through the iPad interface like Foreflight and now with ADSB in/out real time traffic has made embracing new technology a no-brainer. The double redundancy of having a phone to back it up should anything happen to the iPad ensures you “never skip a beat” in the cockpit, says Waldrip.

Waldrip stated that of the many challenges that come from reestablishing a new business from an existing one has been related to their tri-state location and having to ensure all regulatory requirements are adhered to between the three states they work in, which was a handful to start with. The other challenges have centered around volume and ensuring there is enough help available when work increases, which is something that has not been a problem to date, thanks to mutual agreements between operators in other parts of Texas. Waldrip has had to call on them occasionally to ensure all needs of customers have been met, which he likens to a mutual aid agreement of him helping them when needed and vice versa.

Clay Waldrip and his wife Kendall have lived most of their lives in the Texas panhandle, and are now raising Children Magnolia, Fisher and Elanor-Kate and running their business in Dalhart, Texas.

Being born and raised in the Northwest Texas panhandle, Waldrip believes in giving back to the community, from hiring high school kids to load and help out during the busy summer months to believing in those with dreams of becoming a pilot and joining the ag world as he did. His next pilot, scheduled to come online with the arrival of their next aircraft before summer, is a born and bred Dalhart resident, growing up working on farms and being around aircraft who will soon be taking the next step and joining the Flying W family as a pilot in the company’s next aircraft. “It’s so hard to get into this business, especially not being a part of it or growing up in it, so if I can help somebody else in the business to get into the pilot seat, then that is what I’m going to do.”

No business can be successful without support staff to make it happen. Waldrip is no exception to the rule. Waldrip considers himself lucky to have the assistance of Clinton Hale, who oversees the business’s day-to-day operations, from customer booking to load scheduling and everything in between. Waldrip stated that he “was the best thing that came with the business,” keeping everything running smoothly in addition to a second pilot and help from his wife with business operations.

Flying W Aviation is a business destined to be handed down in the family, although not for a while to come. However, with the hard work and determination being put in, success for Flying W Aviation seems to be not a case of “if” but “when” for the Waldrip family.

In addition to Clay’s wife Kendall, the rest of the staff that keep Flying W Aviation running are from left, Emory Lobley, Clay Waldrip, and Clinton Hale 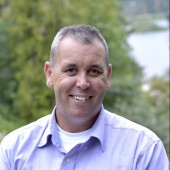 Milestone 4,000th Air Tractor is a Bird of a Different Color